The Dallas Mavericks fell prey to Kawhi Leonard and the Los Angeles Clippers in California tonight, but not without Luka Doncic giving his all with yet another scintillating performance for the Mavs.

Doncic drove Clippers defenders crazy. When he wasn’t putting baskets on the scoreboard, the Mavs superstar was with his feet behind the line putting up free after free. He finished with a record 34 points with 12 of 22 from the field and 16 of 21 from the charity line.

Doncic also added 11 rebounds, 7 assists and 2 recovered balls in 43 minutes. After yet another 40-point performance against Los Angeles, Doncic now has the most such feats against the Clippers in NBA history, surpassing both Los Angeles Lakers legend Kobe Bryant and Kevin Durant of the Brooklyn Nets. 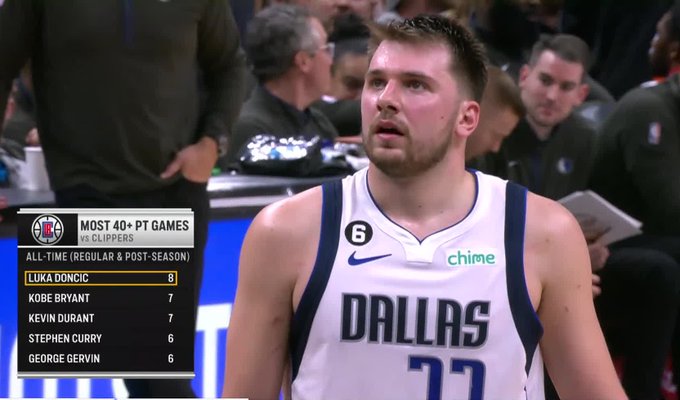 There is something about the Clippers that seems to bring out the best in the Mavs star. The Slovenian came into Tuesday night’s game with a career average of 31.7 points in 13 games against the Clippers. He once beat the Clippers by scoring 51 points, and in his last eight meetings with Los Angeles, Doncic has collected five 40-plus point performances.

Read also: Fontecchio finally back on the court — albeit briefly