L’All Star Game 2023 will be staged on Feb. 19 in Salt Lake City, fan voting began on Christmas Day and now, nearly two weeks later, the NBA has released the first results. This is the first of three rounds, the league will publish updated results every week until they are final: they will be worth 50 percent of the total, the remaining 50 percent will be divided equally between players and journalists.

In these first weeks, most fans voted LeBron James and Kevin Durant., who to date would be the captains of the two teams according to fans. Dominating the voting in the backcourt, however, are Steph Curry on one side and Kyrie Irving on the other.

Just behind KD in the frontcourt in the East is Giannis Antetokounmpo, followed (more than 700k votes away) by Joel Embiid. Currently out of the quintet, again according to the fans, are Jayson Tatum and James Harden, the latter closely preceded by Donovan Mitchell.

In the West, after LeBron and Curry, if voting ended today they would end up in the quintet, according to fans, Nikola Jokic, Anthony Davis and Luka Doncic, out by a small margin Zion Williamson. Curry and Doncic, on the other hand, are virtually certain to finish first in the backcourt in the West, given their nearly 1.5 million vote lead over Ja Morant, third. 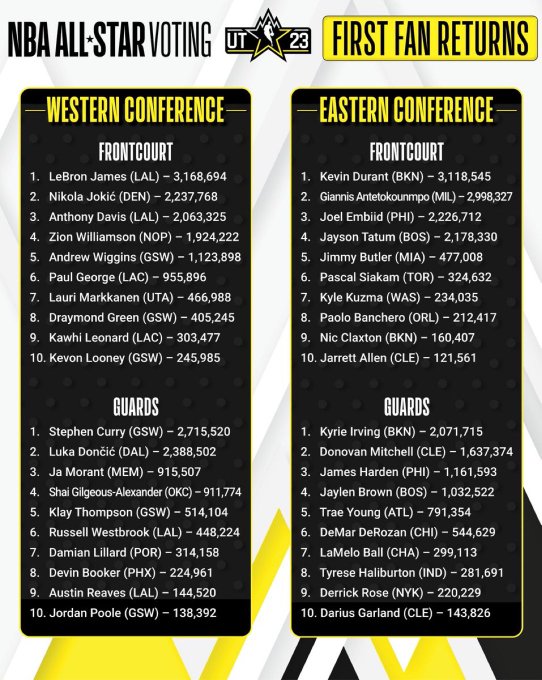 Read more :   Chet Holmgren in his debut made a new Summer League record for wicks

Milan. A graduate in Labor Management and Communication for Organizations from Catholic University, I founded BasketUniverso in 2011. Yes, I root for Orlando Magic and do my best not to hide it.